The Antrim Coast and Glens has been settled since Mesolithic times (7000-4000BC). Later during the Neolithic period (4000-2500 BC) porcellanite axeheads from Tievebulliagh and Brockley on Rathlin were traded throughout Britain and Ireland. Court, Portal and Passage Tombs are common such as at Carnanmore close to Torr Head. Bronze Age sites include Dunteige Wedge Tomb and Knockdhu promontory fort overlooking Ballygally. 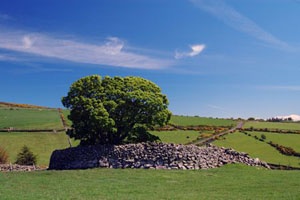 A second large promontory fort at Lurigethan near Cushendall may date from the Iron Age (300BC–AD400). Raths and Cashels, such as Altagore Cashel near Cushendun are typical of the Early Christian period whilst medieval monuments include Bonamargy Friary and Bruce’s Castle on Rathlin. Ballygally Castle is the most famous building dating from the plantation period and has been in continuous use for over 400 years.

Glenarm is one of the oldest villages on the coast and the ‘seat’ of the Antrim McDonnells. It includes the remains of a Franciscan friary, Glenarm Castle, the Barbican Gate and the old core of the village with its 19th century shop fronts.

Carnlough’s 19th century industrial heritage is associated with the Marchioness of Londonderry who developed the limestone industry. The conservation area includes the railway bridge, harbour, hotel and town hall.

Often referred to as the ‘Capital of the Glens’ the growth of Cushendall was associated with Francis Turnley. The conservation area includes the Curfew Tower, ‘Cottage site’ and surrounding woodland.

Cushendun is one of the prettiest villages on the coast and its distinctive architecture is associated with the architect Clough William Ellis. The conservation area includes Cushendun Hotel, the ‘Square’ and Maud Cottages. 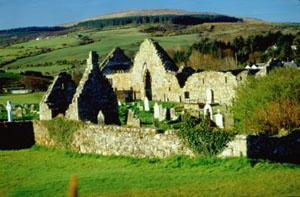 Famous for the Lammas Fair Ballycastle is the largest of the five conservation areas. It has great character and includes many fine shopfronts along Ann Street, Castle Street and the ‘Diamond’.

There are many listed buildings and historic monuments within the Antrim Coast and Glens AONB. Five of these, including Ossian’s Grave in Glenaan, Layde Church near Cushendall and Bonamargy Friary at Ballycastle are in state care. 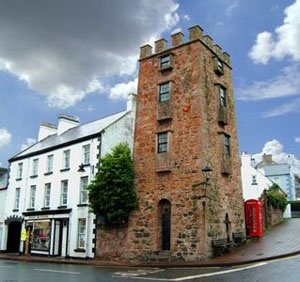