Much of the character of the Antrim Coast and Glens AONB is derived from its close associations with Scotland. Previously part of the ancient sea kingdom of Dalriada, the Scottish influence is evident everywhere in place-names, music, language and dance. Fought over by the McQuillans, McDonnells and near neighbours the O’Neills its turbulent history is reflected in the many battle sites throughout the area such as Slieveanorra, Glentaisie and Rathlin. Glenarm Castle has been home to the Antrim McDonnells for over 400 years.

Folklore is alive and well within the Antrim Coast and Glens and the area has always had strong associations with the ‘wee folk’. Many of the place names reflect this tradition such as Feystown (town of the fairies), Breen (the fairy palace) and Skeagh (the fairy thorn).

In terms of mythology the area has associations with ‘Ossian the bard’, the ‘Children of Lir’ and also produced Julia McQuillan, Bonamargy’s ‘Black Nun’ who could reputedly predict the future. The area has many literary associations and oral history, music and dance are all still strong. The middle glens around Cushendall are famous for traditional sports especially hurling whilst four oar gig racing takes place within many of the coastal villages but is especially popular in Carnlough. Other more unusual traditions include model boat racing which takes place on Rathlin every year.

The Antrim Coast and Glens AONB is a living landscape and its many small farms have produced an intimate patchwork of hedgerows and dry stone walls.

Most of the farming is beef and sheep with some potatoes grown on the better ground such as the Braid Valley. A large part of the Antrim Coast and Glens AONB has been designated as environmentally sensitive helping to ensure this rich agricultural heritage is retained for the benefit of future generations.Glenariff has distinctive ‘ladder farms’ allowing each farm to have a strip of land running from the valley floor to the upper slopes.

Industry has also had a significant impact on the area. Limestone quarrying was previously important at Carnlough and still continues today at Glenarm and Kilwaughter. Similarly Iron and Bauxite ores were previously mined at Glenravel and shipped to Scotland. Low quality coal was also mined near Ballycastle.

Fishing has been confined to mainly inshore lobster and crab. Torr Head is the only fixed net salmon fishery still in use along the coast.

Tourism has always been important. The Antrim Coast Road now known as part of the ‘Causeway Coastal Route’ was built between 1832 and 1842. A plaque north of Larne commemorates both William Bald, the Scottish engineer and the ‘Men of the Glynnes’ who helped to build this famous touring route.

The Nine Glens of Antrim 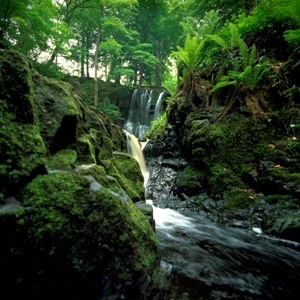 No guide to the Antrim Coast & Glens AONB would be complete without reference to the famous ‘Nine Glens of Antrim’. Like many other sites within the area these place names are derived from Irish and often provide a link with how the area was used in the past. Roughly translated they mean the following: